Why Wim and his friends are awesome

After i left york, which i would later return to but thats another story, i meant to meet up with Wim Shih, a former resident of mine from Travers 10 Intensified Study (and partying) floor. A quick two hour train ride and a brief introduction to the London Tube(1) system and i found Wim at Marlybone station. We walked for 1 min and arrived at his flat, which he shared with one other guy and about 8 girls (i think i remembered 3 names) we went out for a drink, did some catching up and then returned to the flat, where i found the couch i would be gratefully staying on. The next day i decided to explore the West End. Found there was a TKTS there, but no shows i really wanted to see so i walked around some more and found a movie theatre that shows less recent films for 1 pound 50. sweet. so i get in line to see the inside man, when i get inside i find that fridays are special one pound days so i buy myself a 1 pound haggen daas(2) ice cream to celebrate the cheaper ticket.

Afterwards i went to a net cafe and got an email from the last hostel i stayed at. it seems that i left my glasses there. they asked me for my credit card info via email so they could ship them to me. this seemed kinda shady so i decided to just use one of my rail passes and go back up and get them(3). Later that evening I met wim and another group of his friends at a piano jazz bar. very nice. it was there that i met wasseem and we teamed up the next day to go to Dover. Dover Castle was amazing. we spent 5 hours exploring the place and attending a tour on the secret underground command tunnels used during WWII and the Cold War(4).

On Monday I took a day trip to Cardiff. Really neat city in wales, although only recently built up. It has many arcades lined with shops and eateries(5) not to mention one of the best amalgamations of architecture in the UK. Cardiff Castle was originaly (you should see a pattern here) Roman, taken over by the Normans, and then molded into the British Kingdom. But this side had the added oppurtunity of having a Victorian Neo-Gothic pseudo-mediveal townhouse built on it by the Marquess of Butte(sp?). The tour included a visit to a modern falconer (6). I met a lovely lady there who suggested i go to St. Fagans Village to see example of welsh village life, but i did not have enough time and was sorely dissapointed.

The next day i went to Bath to see the Roman Baths. nuff said, they were awesome. It was also on this day that i met up with megan smith, who rocks(7) and i bid farewell to my hosts by buying them lots of homeade fudge(8). I spent a total of 6 nights with wim and that is why he is awesome.

The next day i left london at 8:30, took 1 subway, 1 train, 1 ferry, and then 3 more trains in order to arrive in Brugge, where of course it was dark and raining as i tried to find my hostel, which i did. More to come later.

(1)I love the Tube. Ian said that if you have ever taken a the NYC subway, then you can easily handle the tube. he was sooo right. It is twice as clean as NY, much easirt to navigate the tunnels to trains, and has CUSHIONS on the seats even. only downside is no air conditioned cars. oh well. also where we have guys playing old trumpets and pickle drums, they have guys playing harps for spare change.

(2)They have sit down haggen-daas restaurants here, how cool is that! Oh and there appears to be quite a few ben and jerrys stores as well. so far i have resisted the urge to go there.

(3)I went on sunday and much to my dismay the 1 pound Mr.Sandwich was closed. BUT i took this oppurtunity to sample 2 cornish pasties (stilton and steak and cheese and onion fillings) wow were they good.

(4)it was thought the cliffs would protect those inside from nuclear fallout, but then they realized the white chalk was porous and really offerred little protection.

(5)where i had the worst mixed grill of my life, should stuck with a pasty.

(6) who mainly uses his hawks to scare away pigeons at the football stadium. he also has a bird that is a cross breed of a merlin and a peregrin falcon. While it is one of the quickest birds alive with the ability to fly verticaly, it is also the size of a merlin and can only hope to "ride" rabbits, not actually kill them.

(7) and said she would only read my blog if i mentioned her in it.

(8) which, according to the guy in the store, tastes so good it will blow your face off. it was good but not quite that good as everyone's faces remained intact.

For those of you having trouble finding my pics 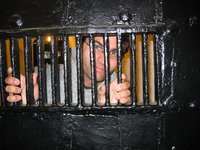 Don't worry, i was never actually locked up in Kilmainham Gaol 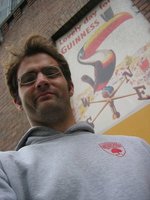 Did you know the Toucan was last used in a Guinness marketing campaign in 1985? 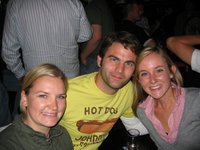 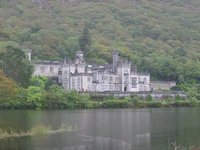 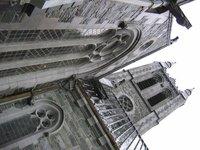 Kylmore Cathedral and its not really all that big. 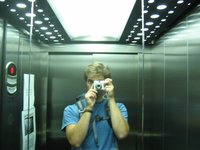 Mom here is proof that i am still in one piece and in the nicest lift i have ever been in. 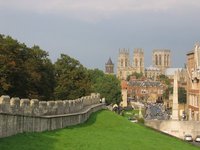 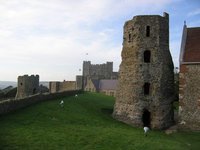 Roman lighthouse in foreground, Dover Castle in back, used to defend England from 1128 till the 1970's.